Thanks to an injection of lottery cash, two former nurses from Yorkshire are now two of the country’s premier experts on nursing in World War I. Between them they have published a book and 50 lectures thanks to getting involved in a World War I nursing project set up by North Yorkshire County Records Office. The HLF funded scheme allows people to research and highlight the Auxiliary Hospitals set up by and for Red Cross in North Riding. Following retirement, the two women decided to become Red Cross volunteers and train others in First Aid. 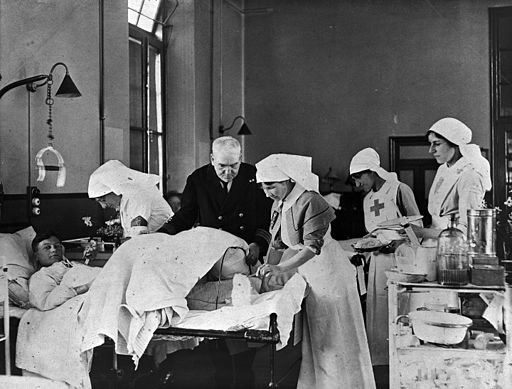 See page for author [CC BY 4.0 (http://creativecommons.org/licenses/by/4.0)], via Wikimedia Commons

It was through this that they became part of the World War I nursing study set up by their local records office. A village hall nearby asked them, as part of the centenary of the beginning of World War I, to recreate an Auxiliary Hospital inside the building. The scheme was a success and attracted the interest of many locals. It was during this that they heard about the HLF (Heritage Lottery Fund) set aside to research the facilities in North Riding between 1914 and 1918. Spurred on by their passion for nursing, they found all sorts of weird and wonderful properties were given over to hospital space.

The HLF fund permitted them the time and the resources to research this fascinating aspect of one of Europe’s darkest periods. Now, Anne Wall and Eileen Brereton are considered an expert double act in the history of World War I nursing in North Yorkshire. But they were staggered to hear information offered freely by members of the public – people who had family who served or were hospitalised there. This was a wealth of information that many not otherwise have come to light. They ended up writing a book and have thanked you, the lottery player, for helping to make it happen.