It can be said that lottery players are a superstitious bunch. It can also be said that people in Asia are more superstitious than we are in the west. Recently, we brought you news of a Thai Buddhist monk who won the lottery. He credited a tree for his win and gave the money away. The latest news story out of the country is that lottery players are flocking to a lucky Thai road sign in Mukdahan. The simple road sign (below) has – as any such sign does – distances to the nearest settlements. Nothing about it really stands out. However, the first three numbers on this road sign were drawn for three lotteries in a row. 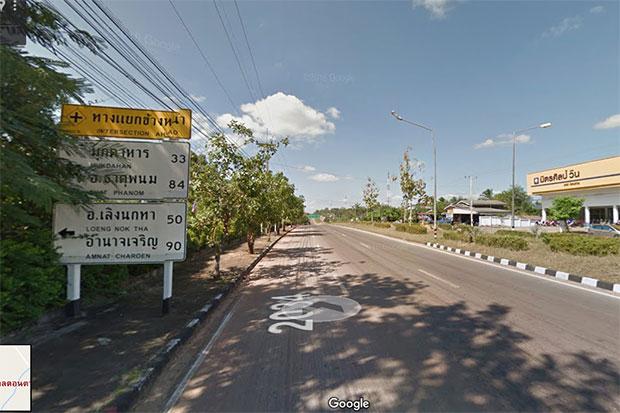 Near a hospital on Highway 2034 in Don Tan District, the lucky Thai road sign is the centre of a storm. The Thai lottery works slightly different from anything you may play with Camelot and other UK based lotteries. The government sells batches of tickets to vendors who then sell on these tickets to players. Each ticket has an individualised number for each draw. Players do not choose at random, but select the numbers based on vendor stock. In the last two lottery draws, 33, 84 and 50 numbered tickets were in the winning ticket code.

Driven by the lucky Thai road sign, players began snapping up tickets with number 90 in the code ahead of the 1st October draw. It created a local panic as players went out of their way to claim “lucky” tickets. So how did the 1st October draw go? The number 90 did not come out; neither did 06 as some others hoped. 887102 was the winning code. So it seems the road sign was all out of luck to impart on players. No numbers are more likely to come out than others – the process is random, but that’s no reason why you can’t speculate and have fun while playing.