A Scottish town, famous for being a medieval burh, has received a cash injection thanks to lottery players. The Paisley lottery money will amount to around £1.9m and will form part of a £4.5m overhaul of the historic town centre. Paisley is located in Renfrewshire and is the administrative capital of the county. The money will go towards upgrading the heritage and historic quarter, hoping to attract tourism from Scotland and the rest of the UK. Despite being some 7 miles from Glasgow, it is considered part of the industrial city’s contiguous area. 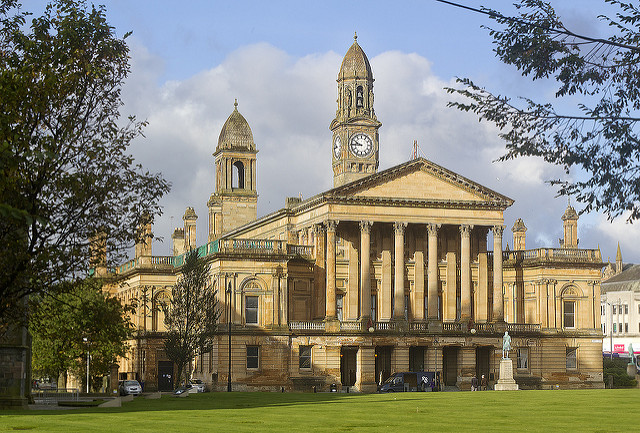 It is the second time that the town has received lottery cash. Last year, it had a grant of £113,000 to help design the plans ahead of application for the larger grant. Paisley lottery money will now be made available to improve the area for visitors and for locals. A number of historic buildings have already been scheduled for repair, but the money will also go towards the Arts Centre. Most importantly, some of the historic structures have been vacant for some time and will need substantial renovation to make them fully functional again. it is hoped that they will soon be occupied and add to the fabric of Paisley.

It began life as a monastic town in the 6th or 7th century. A Cluniac Priory was founded in the 12th century. Today, part of the church survives as the town parish church. It’s real history began several hundred years later though. William Wallace was probably educated there and Robert III is interred at the Abbey Church. Both the Bruce and Stuart families had a fondness for Paisley. James II granted it single regality, making it a major market town. Paisley lottery money will now restore some of the historic structures from the medieval period and beyond.